The exhibition Tadeusz Rolke. Warsaw Photographs presents the works of one of the most outstanding Polish photographers, a doyen of post-war photojournalism, and a Varsovian who has been inseparable from his camera for several decades.

This is the first major presentation of Tadeusz Rolke’s photographs of Warsaw. A multi-themed story about the city in the 1950s and 1960s – from images of the war ruins and the city’s reconstruction in a socialist-realist costume, through street photography, a fascination with fashion, beautiful girls, and Lambretta scooters, to documentations of artistic and social life, portraits of artists and cultural workers. Contrasting with this imagery are pictures of communist politicians, propaganda slogans, and portraits of Karl Marx displayed in public space. 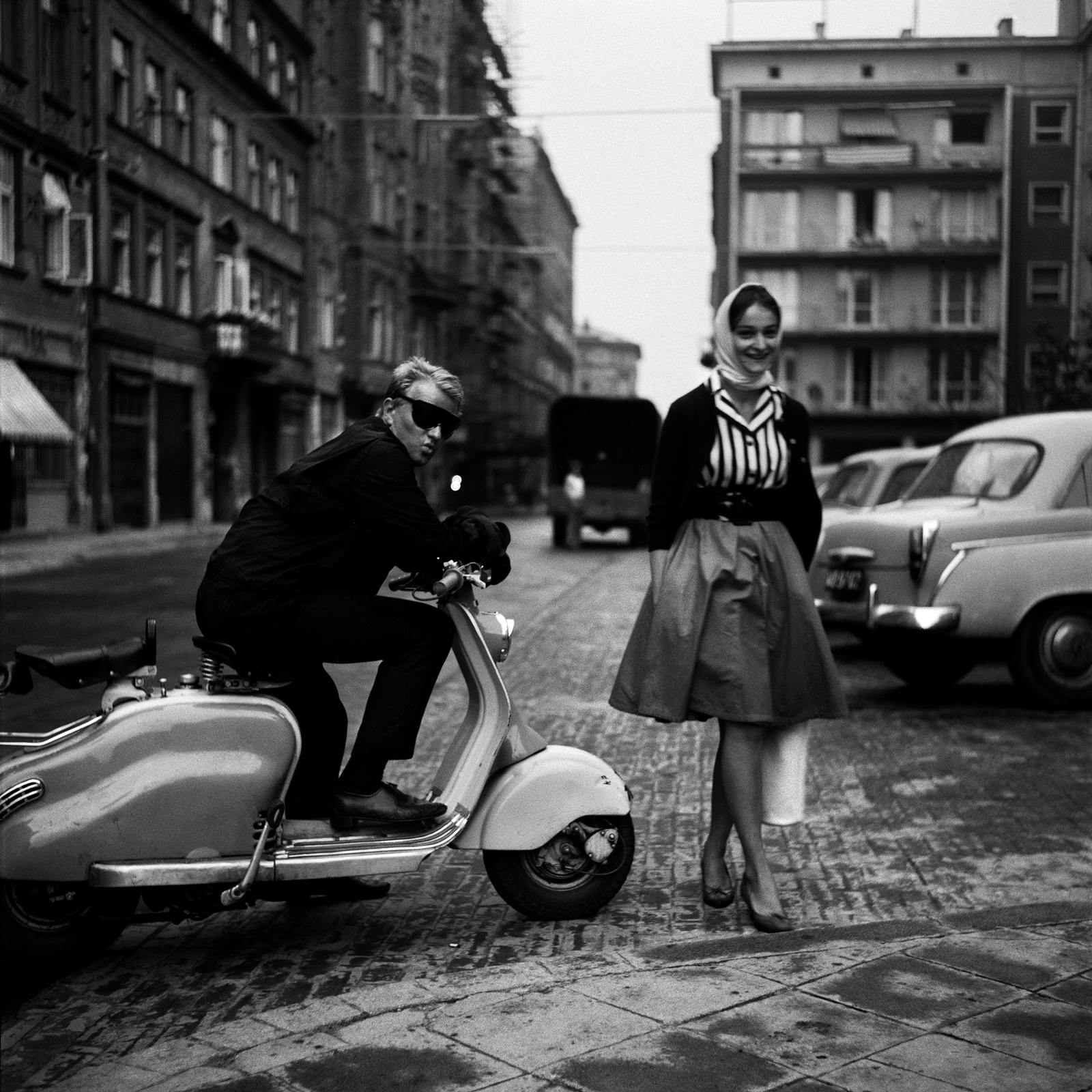 The show’s curators, Anna Brzezińska and Małgorzata Purzyńska, have worked with the author to select over one hundred and fifty photographs from his vast archive. Those are mainly Tadeusz Rolke’s early pictures, shot in the 1950s and 1960s for magazines such as Stolica, Polska, Ty i Ja, or Przekrój. Black-and-white photographs both documentary and artistic, news shots, portraits of celebrities (e.g., Zbigniew Cybulski, Ewa Demarczyk, Kalina Jędrusik, Tadeusz Kantor, Tadeusz Konwicki, Alina Szapocznikow, or Małgorzata Braunek), and fashion photographs. Also featured are selected colour works from the later years.

Complementing the show are recordings of the author talking about his pictures and reminiscing about Warsaw. On display will also be his first camera, a Zeiss Ikon Baby Box Tengor, as well as original issues of the Stolica weekly, for which he shot many assignments: editorials, photo-essays, and cover pictures.

“It was a passionate experience selecting pictures for the show. And not an easy task at all for Tadeusz Rolke’s photographs can be arranged into many different stories,” the curators, Anna Brzezińska and Małgorzata Purzyńska, stress. “Since 1944, when he bought his first camera as a teenager, he has been taking pictures virtually all the time. His early fashion photography is ingenious, dynamic, daring, and often groundbreaking. His moody portraits appeal to you with their elusive sense of nostalgia whereas the street shots bespeak of their author’s sharp eye as well as sympathy and respect for the people he turns his lens at. These pictures show how he worked as a photojournalist, but also what fascinated him as an artist. They are a record of his own biography and of the city’s history.” The two aspects interweave in the exhibition, illuminating their own correlations and contrasts. This is the story of a photographer who in his pursuit of themes has immortalized their background – the city.

“Rather than limiting himself to the assignment alone, a photographer such as myself pictures everything else as well: people, their interactions, the market, the street, the signs,” the author explains in an autobiographical interview with Małgorzata Purzyńska, published in a book form as Tadeusz Rolke. Moja namiętność.

The exhibition will be accompanied by the publication of a photo-book, Rolke. Fotografie warszawskie, and by a series of promotional events. On 24 May we will celebrate at the History Meeting House Tadeusz Rolke’s ninetieth birthday.

Tadeusz Rolke is a legend of Polish photojournalism and fashion photography. He has been taking pictures for over seventy years now and his archive, which contains over 100,000 images, includes documentary, advertising, and fashion photographs, photo-essays, nudes, and portraits. A witness to several eras, Varsovian, Uprising soldier, forced labourer in Nazi Germany, and political prisoner under Stalinism, Rolke began his career as a press photographer in the mid-1950s by freelancing for Świat Młodych. Later a full-time photographer for Stolica, in the 1960s he also published in Polska, Ty i Ja, and Przekrój. He spent over ten years living in Western Europe, shooting stories for Stern, Die Zeit, Der Spiegel, Brigitte, Geo, and Art, Germany’s leading art periodical. Since his return to Poland in the early 1980s, he has been taking pictures, documenting events , and inspiring successive generations of photographers. He will turn ninety in May this year.