Where were the first English gardens created? When did modern urban gardening begin to develop in Warsaw? What drew the crowds to a fashionable retreat in the village of Powązki and why were 340 linden trees from the Kampinos Forest replanted there? What role did Izabela Czartoryska, Franciszek Szanior, Leon Danielewicz and Alina Scholtz play in shaping Warsaw’s greenery? You will find answers to all these questions at our open-air exhibition on Ks. Jan Twardowski Square, open to visitors from 10 September to 1 October 2022. 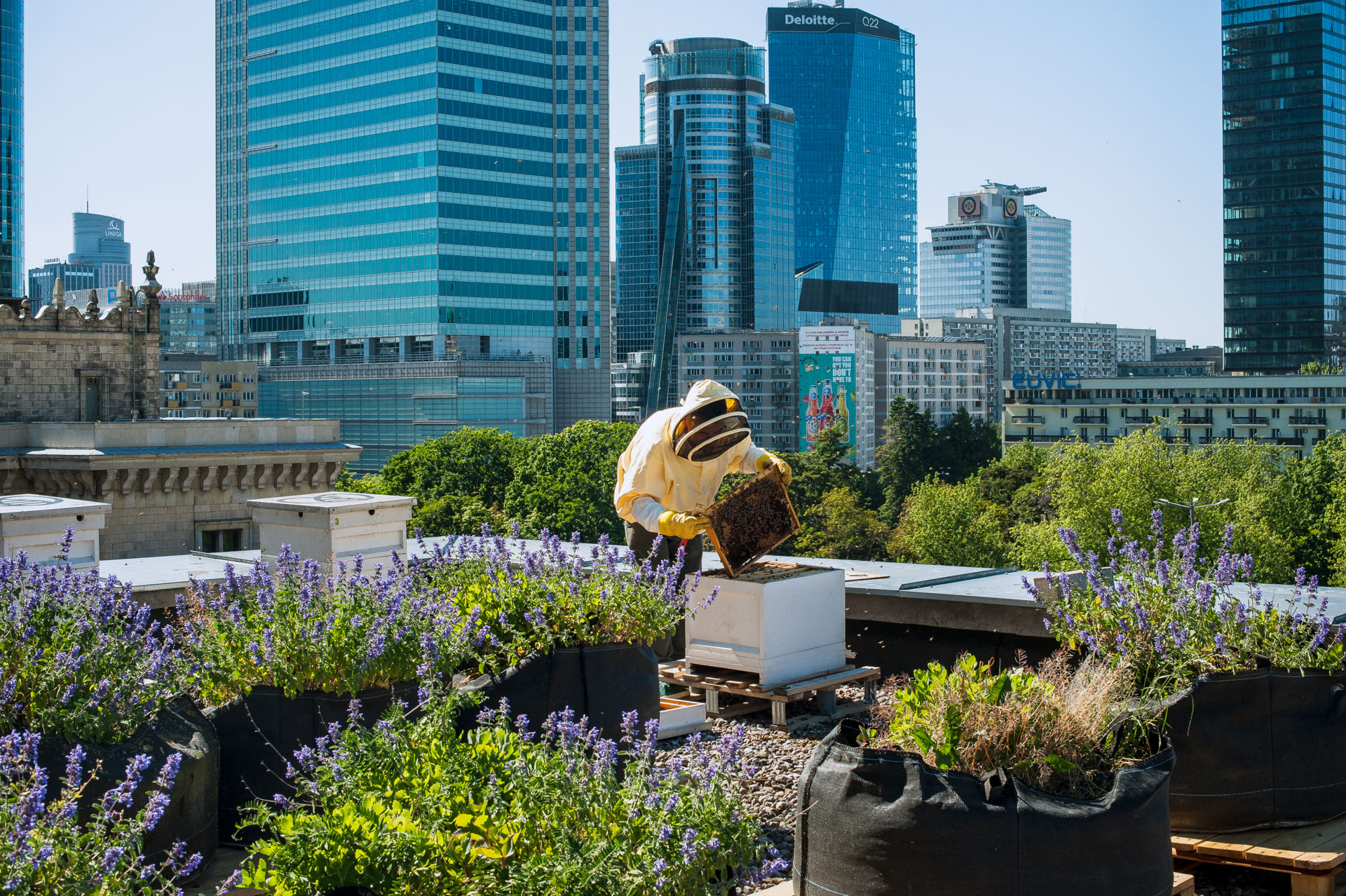 Garden with honey plants for bees created on one of the Palace of Culture and Science terraces by Miejskie Pszczoły. Photo by Aga Bilska

The exhibition, entitled Green Warsaw. Urban gardening initiatives from the 19th century until today, has been prepared by the History Meeting House together with the Warsaw Greenery Authority, and presents the green history of the city: its parks, residential areas, gardens and allotment gardens, as well as past and present initiatives engaging the city’s residents in making Warsaw even greener. It accompanies the Green Warsaw. Alternative Guide written by Agnieszka Kowalska and published by the HMH in July.

The exposition comprises 28 boards which present various aspects of nature in an urban landscape. Each board focuses on a different theme: from the 19th century and pioneer ideas of Izabela Czartoryska to design projects of first real public parks and gardens, to first allotment gardens, and finally to today’s green activity of the capital city’s residents. The exhibition also features many historic and contemporary photographs.

Agnieszka Kowalska, the curator of the exhibition and author of the book: „Warszawa is a very green city and we should make the most. At the same time it shouldn’t be taken for granted, and that’s why we wanted to show important, inspiring and progressive activity that has shaped greenery in this city”.

Development of urban gardening in Warsaw began already in the early 19th century. One of the pioneers of the new movement was Izabela Czartoryska, who then presented her reflections and advice in the book Myśli różne o sposobie zakładania ogrodów (Various Reflections on Starting a Garden), published in 1805. In the guidebook she promoted less formal and more landscape-like gardens. Her passion for gardening was born during her journeys to the Netherlands and England, and later she also supported young greenery enthusiasts by funding scholarships for them. 1879 saw the establishment of a popular biweekly Polish Gardener, and in 1884 the Warsaw Gardeners’ Society was founded.

In 1890s, the city’s chief gardener Franciszek Szanior was the first to design public parks (Ujazdowski Park and Skaryszewski Park). Later, his successor, Leon Danielewicz, created a complex of urban greenhouses with a palm house at Rakowiecka Street. First workers’ gardens were developing, which later turned into today’s allotment gardens. In the housing cooperative in the Żoliborz district kids learnt how to plant vegetables in local vegetable beds, and in the Grochów Kibbutz young Jews prepared to build their own country. President Stefan Starzyński continued to buy woodland for the city and initiated the competition Warsaw in Flowers and Greenery (organised to this day). In the 1920s, first design projects of green districts inspired by the idea of garden cities were made.

After the war, in ruined Warsaw, the need for greenery became even greater. The city authorities decided that architects should not only rebuild residential houses and public buildings, but also plant mature trees and prepare urban areas then covered with rubble for new, future parks. Hydrobotany, sculpting the land, creating green micro-climates – today’s architects can learn all that from Alina Scholtz, who designed, among others, Central Park of Culture, Moczydło Park, and (together with Halina Skibniewska) Sady Żoliborskie and Szwoleżerów housing estates.

The exhibition is accompanied by a book entitled Green Warsaw. Alternative Guide, as well as special walks organized in the capital city and a dedicated Facebook group „Akcja: Zielona Warszawa!” (Action: Green Warsaw!) which encourages local residents to share locations of their favourite green spots in the city and thus create a map of green Warsaw together.