Exotic instruments, dark faces, foreign, melodious words...Brazil? The Amazon river settlement? No. Marszałkowska street in August – that is how the World Festival of Youth and Students in Warsaw in 1955 was described in the Polish press. Why did the PRP aspire to be a good place to live for the Africans who decided to come to Poland to study, work, and pursue their careers? 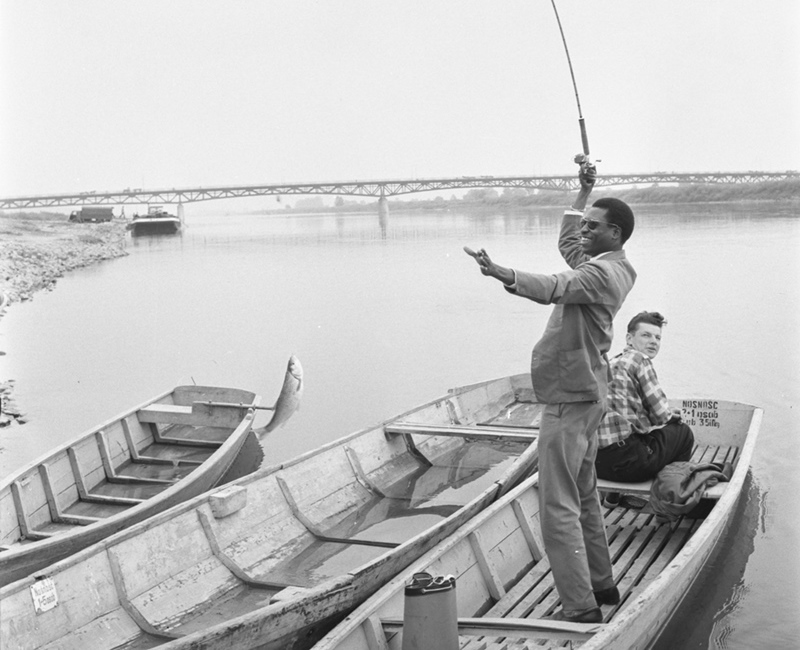 The exhibition presents Polish photographs of the Africans appearing in the daily press from 1955 during the Fifth World Festival of Youth and Students, through the 1960s, i.e. the so-called „year of Africa“, to the students‘ photographs from the 1980s. It is the first exhibition focusing on the presentation and description of the Africans living and staying in Poland. Not only do press photography, newspaper clippings, photographs from the private archives of African people, and excerpts from the chronicles of the School of Polish for Foreign Students in Lódź present their image, but they also show the way in which the authorities and the press back in the day created it.

Bartosz Nowicki, the curator of the exhibition: The scope of the phenomenon is the most surprising. The interest in Africa which the government took, especially in the 1960s, was enormous, which encouraged the influx of African students in Poland. The Photography of the Africans in the PRP was thus made possible, which was obviously exploited by press photographers.

The Africans were depicted as friends, revolutionaries, and ordinary citizens. It was linked with the politics of the USSR (and thus the PRP) of endorsing the countries liberating themselves from colonialism. The aim of those actions was to extend the influence of socialism over the „waking up“ world regions. Socialism in Africa was to be propagated by numerous African students returning to Africa after their studies. The number of African people studying in Poland increased year by year, with only four of them in the 1950s to two thousand in the late 1970s.

After 1960, when seventeen African countries proclaimed independence, the first delegations of African politicians appeared. In 1961 the PRP was visited by such dignitaries as the president of Ghana, Kwame Nkrumah, and the emperor of Ethiopia, Haile Selassie. Their stay was well documented and described in the press.

Propaganda was an important aspect in „the Polish-African friendship“. The press, exploiting photography among other things, showed the PRP as the country where African people were perceived to be equal citizens, and African visitors treated with due respect. On the other hand, however, there were documents presenting the Africans merely as an exotic phenomenon.

All these motifs were collected and arranged into five themes, i.e., Delegates, Students, Revolutionaries, Citizens, and Comrades.